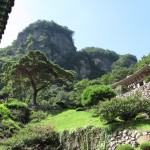 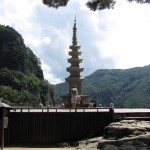 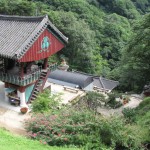 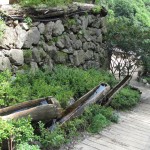 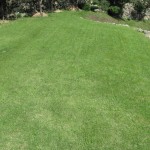 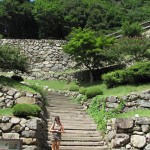 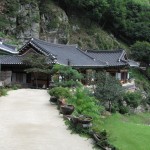 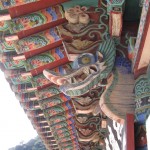 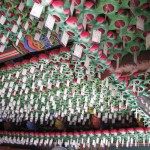 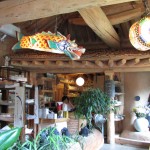 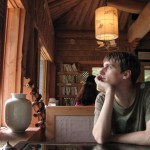 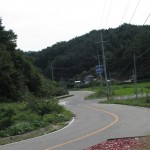 Peppers drying on the road

We kept driving a while in countryside, looking for a hiking track. We left the car in parking and left for the mountain. After a short hour walking, we reached our destination, a Buddhist temple. Yet another “first time” for me. Lost between trees and rocks stood a few houses, and a tall “tower/statue” which obviously was the main point of interest for monks.

Gardens are incredibly well taken care of. I would even dare say better than my brother’s. And the whole place felt extremely peaceful. Except maybe for myself. First thing when I arrived, I noticed a huge pool of fresh water in which I washed my arms to cool down a bit. Luna ran to me to translate the huge warnings written in Korean: “This is the only drinkable water source for monks. Don’t wash in there !”. Oops ! I didn’t feel worth mentioning my mistake to the two men drinking water right after we left.

The place had a house for praying (not sure how they call that) with traditional Korean painting, very colorful as I like them. Its ceiling was covered with small piece of paper which probably are some kind of wishes from people, or maybe monks names. After wandering around we went on the way home and noticed a small restaurant. That probably was the most peaceful and quiet café ever. So quiet that we had to wake up the waitress to get our drinks….

Overall the temple was really nice, I’d stay there much longer, as long as they have internet connection (which I have no doubt about). But we had to keep going on with our trip.

A short while later, we were back in the car, looking for gas station, when I noticed a gas station and slightly further a man lying on the road. Having past both of them I did a u-turn and came back to the gas station, driving almost over the guy lying on the road. Trying to figure out what new culture difference could explain people lying in the middle of the road, I told Luna about what I saw. She didn’t notice anything and did not inform me of any special customs that I should learn about.

Once our car filled up, we went our way, once again passing the man, still lying. This time I drove slowly to show Luna and we noticed he was quite old and not moving much. Being kind and everything we decided to do a u-turn again and go check that guy. It happened to be real old grandpa (I’d say ~70-80 years old) who went shopping for his alcoholics needs (which was something like 3-4 liters of soju) and who almost fainted because of the heat. As he was going home, and we had nothing better to do than helping human beings we gave him a ride. From what I understood, he could barely articulate that his home was slightly further. And a bit further. And then a little turn and keep going straight for a while. And then further. Bit by bit, we drove quite a few kilometers before reaching his village.

He could barely get out of the car without falling, and thanked us many times before we left. I almost was disappointed no to be invited for a drink in his home (as obviously he had enough to drink for at least three of us). I was curious to see inside theses houses. And on the other hand, he looked quite poor, both in health and wealth. That may have changed the whole experience from “I saved a man :-)” to “oh my, how poor is he :-(“. Unusual experience nevertheless.

At least now I am not shocked when I see that people let peppers dry in the middle of the road. If old man can lie there, why not peppers ? Peppers drying on the road