We went for a two days skiing trip to High1 ski resort. One of Korea’s largest resort and also furthest from Seoul.

Waking up at 4h30 in the morning was no small task, especially since we got to bed at the same time the previous night. But I successfully used my hidden energy, that I only use to go skiing, and we were on time for the shuttle bus. And the 3.5+ hours ride/sleep. 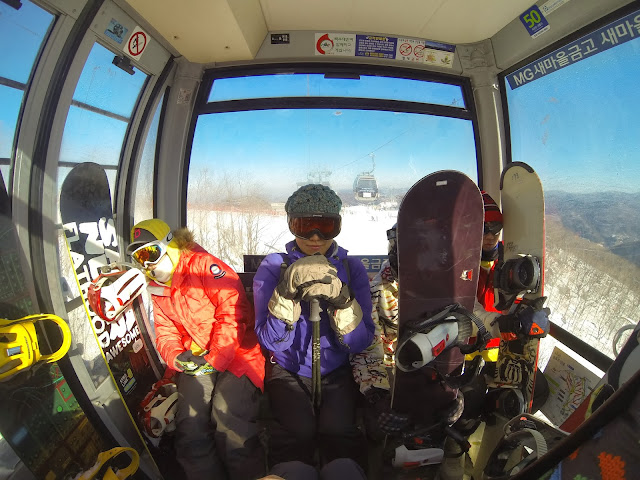 On our arrival we were welcomed by a freezing wind and we had to sort out a few inconveniences to get our ski pass and gears. It wasn’t a very enthusiastic start. Luckily I had a glance at the ski slopes and it did in fact looked like the best places I had skied in Korea yet. So my personal enthusiasm was quickly rising. As did we, in a gondola going straight to the top. After two or three eternities waiting for the mandatory pictures on the top, we finally started our way down. 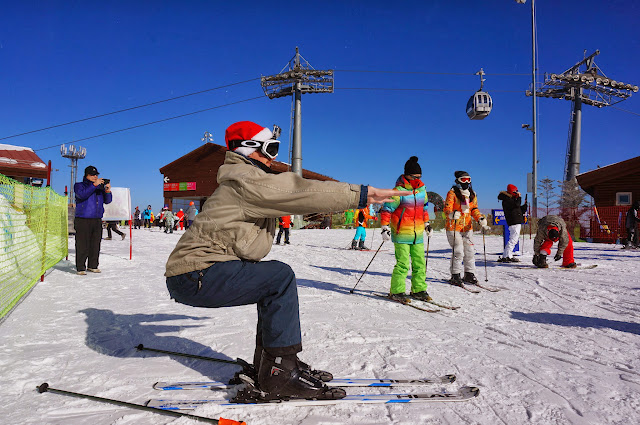 For the first time in almost 15 years I was actually skiing, instead of snowboarding. I was a bit anxious but it all came back faster than I expected. And I must say that carved skis are fun to ride. The pain of walking and carrying around skis and poles is balanced by the freedom you get once on the snow. Stand straight(er) at low speed, face the slope at all times, walk around with two (long) feet, do foolish things with poles (including pushing yourself when it’s flat or hitting your friends). Those are some of the joy of skiing that I forgot for the past 15 years. 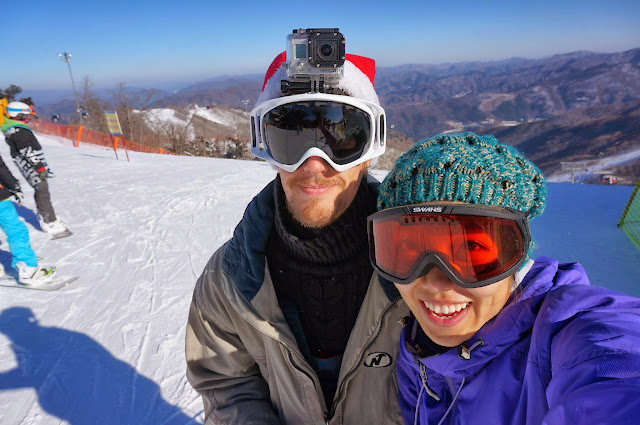 We played it safe and planned skiing only two half days. So in a flash it was already time to give back our gear and go for lunch. We relaxed in the swimming pool of our hotel for the second part of the afternoon. And we found ourselves eating again after that. I was shocked to discover that the “salad buffet” included terrines, shrimps, salmon, oyster, chicken, soups, rice, fruits, cakes and ice cream. Had we know that beforehand we might not have ordered two extras pizzas. Korea never cease to surprise me. 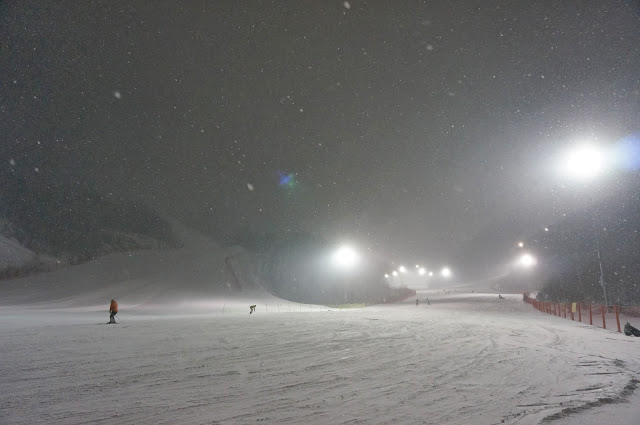 Because Luna is afraid of nothing and because love makes wonders, we democratically decided to go skiing in the evening. That was an excellent decision for it started snowing. Except that we misunderstood the timetable and found ourselves paying almost 100’000 wons for slightly more than 1.5 hours. On top of that I didn’t listen to public announcements (in Korean, English and Chinese) and ended up on the slopes that closed the earliest, by myself. Definitely the most expensive two slopes that I ever rode. The next morning my mind was set to enjoy it as much as possible. So I took a snowboard and rode away. High1 is not a single mountain with a few lifts like most other places I’ve seen in Korean. Instead it has three distinct peaks (two with restaurants), one middle place with a restaurant and two bottom stations. That makes room for a lot of slopes and they do have plenty of them. Worth mentioning is the beginner slope from the very top to the very bottom. That’s great not to be stuck at the bottom and be able to ride a very long slope without waiting for lift. 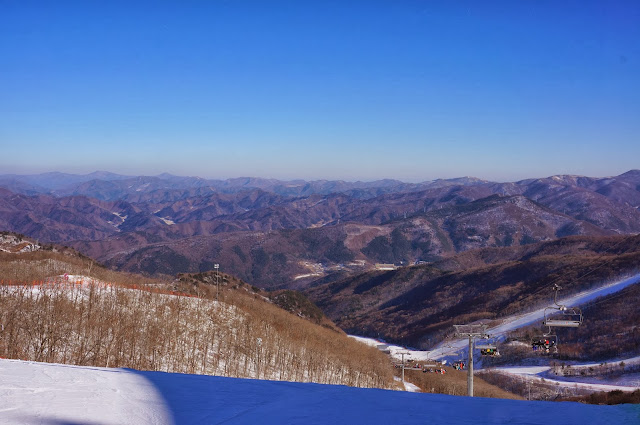 As far as I know, skiing is not a strong part of Korean culture. So while they definitely do ski, they are not necessarily experts. That means a vast majority of people use beginner slopes. That can be an inconvenience for advanced skiers if the resort does not provide enough advanced slopes (or too much mixed with beginners). Luckily this is not the case of High1. There are several advanced and experts slopes. Actually there are so many, that they are almost empty, making for a great riding experience. 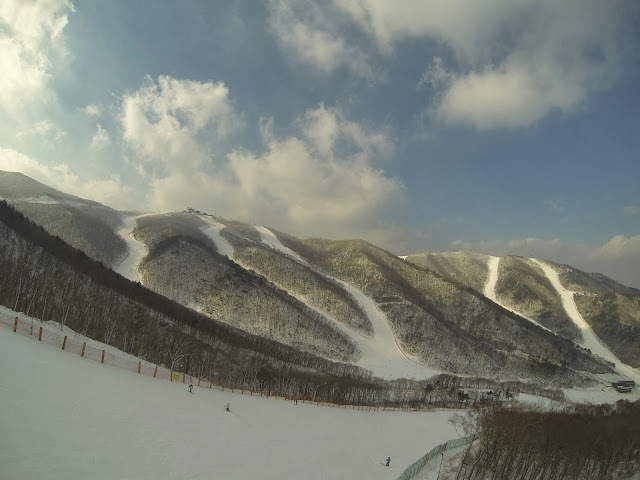 According to my own measurements advanced/experts slopes are between 1.4 and 2.5 km. So in my particular case that would be anywhere between 2 and 5 minutes with a very rough average speed of 30km/h. Taking a lift for 10 to 15 minutes to climb back up. And elevation difference is about 300-350 meters for each slopes. But that’s not counting beginner part of slopes.

If one wander from the top to the bottom that’s about 600 meters of denivelation which can be a mix of difficulty or only beginner. And an advertised maximum length of 4.2 km (measured 3.6 on a shorter variant).

All in all, I was extremely pleased by this resort. Slopes are abundants, wide and well served by lifts. Our hotel was awesome too. I would not go for a single day, since it’s quite far. But it’s perfect for a two days trip (or longer). 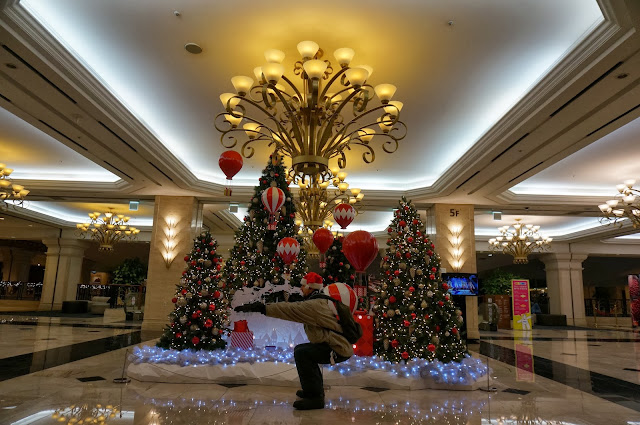 3 thoughts on “Skiing at High1”