To conclude the exploration of the biggest ski resorts in Korea, we went to Muju , , back in 2015. And again, it seems to become a tradition, we spent two days there. 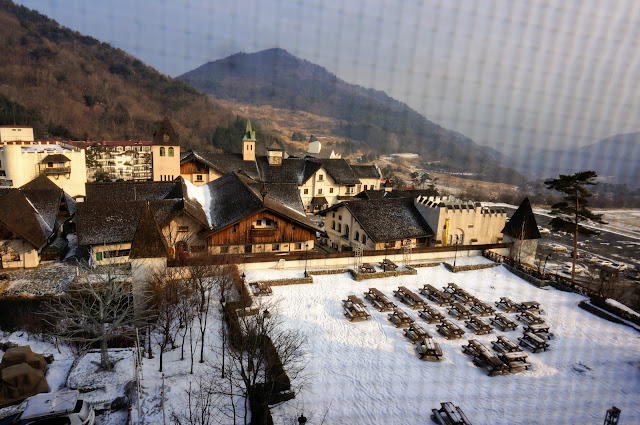 This place, unlike all other resorts I’ve been to, is down south, not east. But it doesn’t really matter much. Travel time is similar and mountains all look the same to me. However this resort is part of a national park, and the village itself was built to reproduce a Tirol ambiance. That made it somewhat familiar for me, and is one famous excursion goal, as much in winter as in summer. 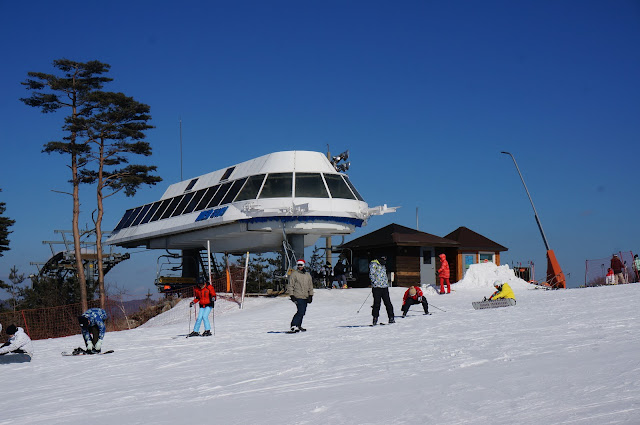 Our original intent was to ski one and half day. But for some reasons we ended up with two full day passes each. That slightly messed up our plan but we managed to enjoy it anyway.

I picked a snowboard for the first afternoon and night. This resort has two distinct bases and two peaks. I was told that the peak with gondola was a very famous destination for tourists but you can’t ride the gondolas with skis. So we went on the other side. 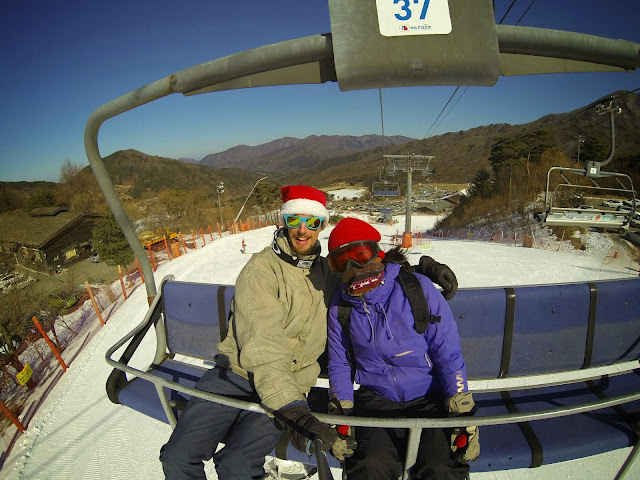 That side has, more or less, 4 slopes: beginner, intermediate, advanced and expert. Most of them from the same lift (convenient to meet people). Unfortunately the expert one, which seem to be forbidden to snowboard, was closed. So I couldn’t try the steepest Korean slope. Disappointed. But that was a nice sunny afternoon, albeit very cold, and I enjoyed what was available.

When time came for supper, we had planned to give back our gears and spend the night in a thermal pool. But since it started snowing and we had a pass for the night anyway, we changed our mind, kept our gears and went to grab a quick meal. We then realized that our super nice, Tirol themed, hotel was literally the building next to the cheap cafeteria where we ate. Right at the bottom of the slopes. Had we known that earlier, we could have had a better meal, in a non-freezing place. Tough luck.

We checked in the hotel anyway and had a much needed warm tea next to the fireplace before going out again in the dark cold night. After a few more slopes, we had to “cross” back , since we rented our gear at the first base. With the tiredness and the unexpectedly steep slope, it proved to be a bit tedious to go back. But once there, to my surprise (and joy), Luna insisted to do one more slope. We concluded that day with cheese hot-dogs and gluhwein (gluhwein newish trend in Korea is a benediction). 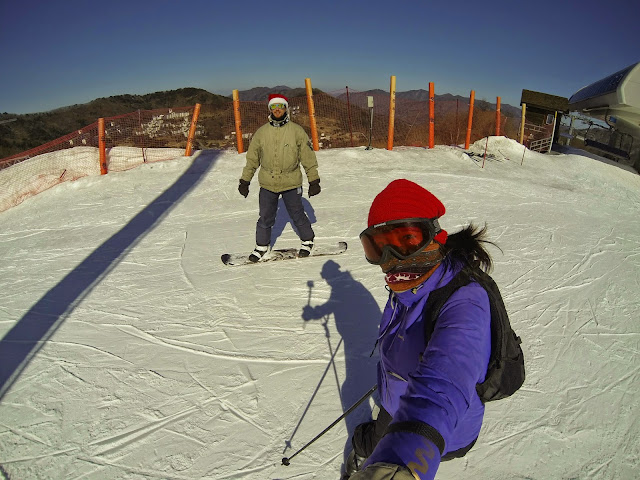 The second day, we took our time to get up (extremely wide beds are great), were late for breakfast (but were still allowed to eat quickly), and showed up on the slopes just shy of 11h00. Strangely enough we wanted to ski on the other side, so we “crossed” again, in order to try the longest Korean slope. I was getting excited but unfortunately realized that gondolas are forbidden for skiers, and the only ski lift going to the very top was closed (along with all slopes coming from the top obviously). That was a big disappointment because that meant I missed both the longest and steepest slopes, and there was only two slopes available on that side for the rest of the day. Luckily the second slope was fun for both Luna and me.

Finally we crossed for the last time, coming back on the hotel side. We had a few more rides, to be sure to be thoroughly exhausted. Then we gave back our gears and headed toward the hotel were we wanted to have lunch since we couldn’t have supper the day before. Except that the restaurant was already closed, so we had to fallback on junk food. 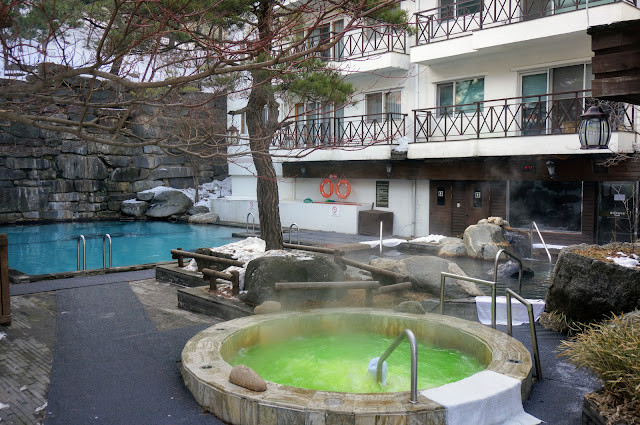 After all this freezing sport, the thermal pool was much appreciated. Not for too long, because I melt easily in hot water, but long enough to relax.

Overall it was a nice trip. The two day formula works great, especially with package including hotel. And I like the resort even though quite a few slopes were closed. Also going during the week is a huge plus, almost no waiting at all ! 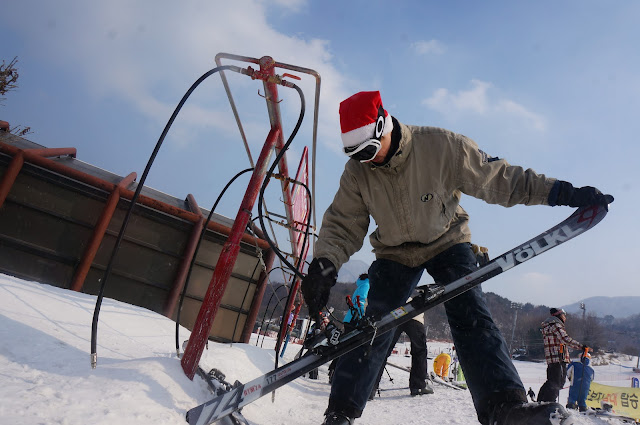