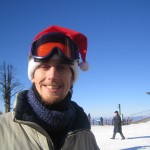 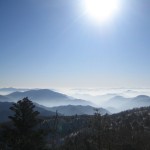 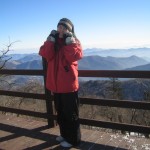 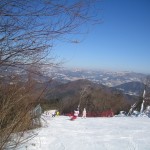 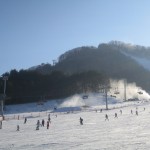 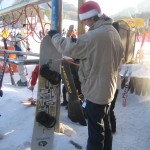 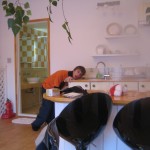 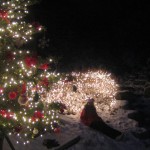 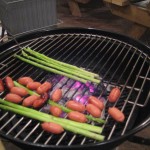 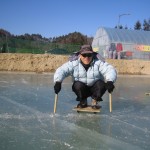 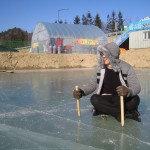 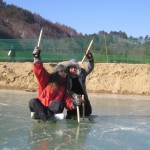 When I went to Australia I packed my snowboard gears and carried it around for six months. Only to be able to ski one (short) day during my trip in New Zealand. So when I learned that Korea have actual ski resort, I couldn’t resist.

Luna planned a small trip to the east sea and on the way we stopped in a ski resort. Departure around 05h00 was early, especially when I was used to get up at 12h00. But I somehow managed to move quickly enough not to miss the bus. After three hours on the road (sleeping of course), we arrived at destination.

Unfortunately, Luna’s brother hurt his leg a few days earlier and he couldn’t ride with me. So I was to ride by myself as Luna herself was too sick to play in snow.

I actually was pretty much surprised by the resort. It is not as big as what we may find in Switzerland, but there was still quite a few slopes and a bunch of lift. There even was cabins (Swiss made, of course ;)). Overall slopes were quite easy, but “Experts Only” one were interesting enough.

The main difference is probably the presence of a lot of staff to “help” people. Such as the one at the top of the slope shouting all day something like “please, get ready fast and go down as soon as possible, don’t stay in the way“. Probably a nice intention but considering the few people present in such a big place, that probably wasn’t necessary.

There is as well several snow patrol which basically is a guy standing in the middle of the slope paying attention to dangerous behaviors, such as fast skiers. I’ve got yelled at a few times, but as I didn’t understand what they said I didn’t stop, nor slowed down ;-)

The most fun staff are probably the girls at every lifts who greet you every time you pass by shaking their rabbits shaped gloves. Kind of cute :-)

Luna’s parent were to join us next day to keep on traveling to east sea. So we slept in a very charming pension near the resort. Right next to it was a frozen river where some guys dug holes in order to fish. In fact there was two frozen area, one for fishing, and one for sledding.

So on Friday morning, as Luna’s family was late, we went down the frozen river. We rent two luges and I could experience what it may be like to have no legs.

My family-in-law eventually joined us there and Luna’s father showed off his incredible skill for sledding on his feet. It may not look like but it not’s that easy. I tried to mimic him but I had to face the truth and return to the original leggless position.