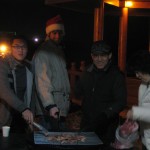 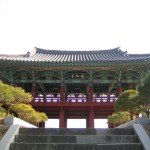 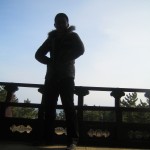 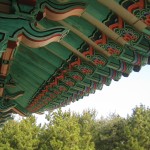 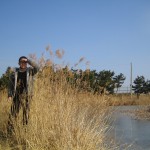 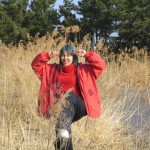 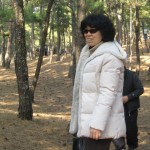 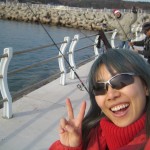 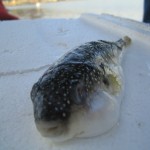 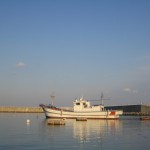 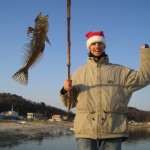 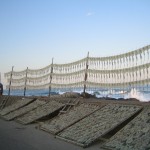 After a few unfortunate events, such as being late, misplaced pension and unexpected high price. We had to give up the original plan which was to go fishing by boat. However without any further notice they improvised an emergency plan for the day.

We made a first stop at the beach where a traditional house were standing. I like their architecture, especially vivid colors and patterns they use for paintings.

The house was separated from the beach by high fence, which I actually noticed the day before. In fact there is a fence all along the beach from top north down to somewhere in the middle of South Korea. I have been told it is to prevent North Korean spy to get in the country. Weird feeling, and probably not that efficient as the gate was wide open.

We arrived at a large port were we saw a few other fishermen. So we first looked for the right spots and after a few doubts we started fishing.

As I never really fished, that was pretty much exciting, especially the thought of eating raw fishes right out of water. But minutes passed slowly, and then hours. We moved a few times, expecting to be on the right spot every time, but it didn’t help.

Luna’s mother even went to the village where she had to beg the shop guy to sell her fish food. He actually was the shop owner’s father and stated that he hated fishermen as they always leave rubbish and empty Soju bottles wherever they fish. But she convinced him that we were a nice family with a foreigner who never fished in the sea. Despite the fish food we did not catch anything. For hours.

Even Luna’s father gave up fishing. So Luna explained we should go for crabs instead of fish as it is way easier to catch them. We looked for sea snails which is crab’s favorite food and started crabbing between rocks with half our snail hanged to a simple string.

I didn’t expect much in spite of what Luna told me, but I suddenly felt my string being pulled ! A crab got the snail. But I didn’t get the crab. We waited longer, in vain. According to Luna we should have caught crabs much faster and it was really unusual not to get any. So we eventually gave up.

We went to play a while on the beach and found two long sticks. With these sticks and our crab string, we made our own fishing rod. Not desperate yet, we proudly went back fishing with our sticks (still with snails).

Back were we looked for crabs, we saw jellyfishes. I could even “catch” one on my stick, but it “split” in two parts when I pull it out of water… poor jellyfish. Anyway I was happy because soon after I found a dead blowfish floating. I caught it, with much ease, with the intention of showing off to Luna’s father. I got really confident in fishing so I kept going ;-)

Paying more attention to Luna than what I was doing, I was extremely surprised when I saw a living fish, coming really close to my half snail. Much more surprised was I when the fish bite the snail ! I totally ran crazy when I actually pulled the fish out of water.

I literally ran far from water, not too lose it shouting to Luna’s father, who didn’t hear before long. That was so much incredible. We spend the whole afternoon fishing with high-tech materials and all kind of professional techniques, but the only one who caught a fish that day was me with a wooden stick. Not only did I caught a fish but he also was incredibly huge ! I still can’t believe it.

We actually released my fish (was to ugly for me to eat anyway), and we head back to Seoul. On the way we saw loads and loads of squids hanged on the roadside. That was as well was pretty much disgusting. Fortunately I didn’t have to eat too much weird things that time.